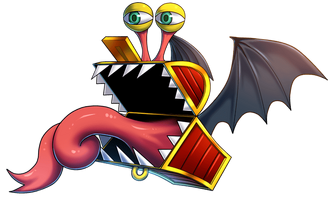 A chest containing a Bat Mimic (or possibly a Mimic at lower level areas) will sporadically shake. Having a large pool of health, capable of attacking multiple times, delivering devastating damage, and inflicting Curse, weakened parties may want to skip opening chests in high level areas if they are concerned that the Bat Mimic will decimate the party, or cause them to expend too many resources and be impeded in their dungeon progress.

Capture of these units is almost always guaranteed, even if the player has already captured a different unit earlier in the round.

Bat Mimics are the only Mimic type units that can be evolved.

Encountering and defeating a Bat Mimic in the Summoner Arc yield 250 experience points for your Summoning Arts.

Retrieved from "https://bravefrontierglobal.fandom.com/wiki/Bat_Mimic?oldid=638858"
Community content is available under CC-BY-SA unless otherwise noted.