Not to be confused with a similar mechanic exclusive to Brave Frontier II called Xross Brave Burst.

Bonding is a mechanic introduced in the Version 2.0.0 Update of the Global version of Brave Frontier. Bonded units join together to unleash their Dual Brave Burst during combat to unleash a mighty power, an Elemental Synergy, in addition to their combined Ultimate Brave Bursts.

In order to unlock the ability for a unit to Bond with its partner, players must first fuse it with an Elemental Golem of the same element type. Doing this will now permanently unlock the unit’s DBB Slot, allowing it to become Bonded with its partner (Unit Pair) that has completed the same steps. Units must be at max level with SP Enhancements unlocked before Elemental Golems become able to be fused.

(e.g. a Fire Golem can only be fused to a Fire Element unit)

To Bond a Unit Pair, enter one of the unit’s Unit Menu and tap on its newly unlocked DBB Slot and select its partner. 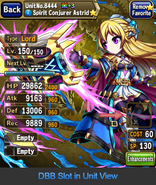 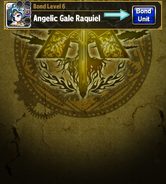 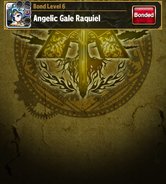 Step 3: Once they’re bonded, their DBB Slots will be filled with a “BB” icon of their partner. 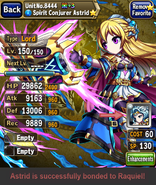 Astrid is now successfully Bonded with her partner, Raquiel.

Both units in the Bonding Pair must be Bonded before utilizing Dual Brave Burst, Bonded Brave Burst, and Elemental Synergy.

The only units in combat that can use Dual Brave Burst are those who have Bonded with their partner (displayed as a blue frame surrounding the unit bar).
Add a photo to this gallery

Step 2: In Bond DBB screen, tap on the Boost button at the bottom to access the Bond Level Boost screen.

Step 3: In the Bond Level Boost screen, the Golems, Zel and Karma requirement will be displayed. Upon meeting the cost requirement, tap on the Boost button to get your Bond Level up.

Xenon and Estia have successfully increased their Bond Level.
Add a photo to this gallery

Orebi Golems can be upgraded from 4★ to 5★. These Greater Golems are used to upgrade Bond Level from 3 to 4.

Add a photo to this gallery

This table lists the total materials required to get to the specified Bond Level for each Elemental Synergy.

To activate Bonded Brave Burst, the player swipes left on a Bonded Unit that is in Overdrive.

Bonded Brave Burst and Bonded Super Brave Burst cannot be affected by the negative effects of Curse and Amnesia.

To activate Dual Brave Burst, the player taps on the Synergy Gauge once enough Synergy Shards are accumulated and swipes up on the desired Bonded Unit.

Buffs from Dual Brave Burst cannot stack with buffs from Ultimate Brave Burst. As such, UBB and DBB buffs can overwrite each other with the most recently activated buff taking precedence.

Hold tap on an available unit to view the details of its Dual Brave Burst.

How do I bond multiple partners to a certain unit?

Similar to the original Dual Brave Burst, players must first fuse an Elemental Golem to all eligible units in order to unlock the DBB slots.

To Bond a Unit Pair, enter one of the unit’s Unit Menu and tap on its DBB Slot. Doing so will open up the Unit Bond Menu. Tap on “Bond Unit” to proceed.

How do I boost the bonds of a certain pairing?

Select the bond partner that you wish to upgrade the DBB bonds of by tapping on their respective unit banner. Thereafter, the ‘Boost’ button will be activated for use.

Tap on the “Boost” button enter the Bond Level Boost Menu. With the right materials, upgrade the pairing’s DBB bonds and improve their elemental synergy!

Pair up with different bond partners and choose an Energy Synergy that best suits your squad’s needs.

Retrieved from "https://bravefrontierglobal.fandom.com/wiki/Bonding?oldid=673501"
Community content is available under CC-BY-SA unless otherwise noted.