For other uses, see Draegar (disambiguation). 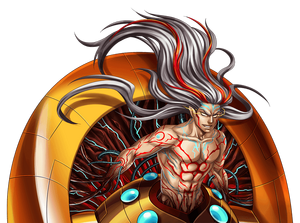 Draegar is a Non-Player Character (NPC) in the game. He is one of Gazia's augmented warriors.

Draegar was the leader of Athensphere’s cavalry forces, a warrior renowned for his strength and battle prowess. Though his position should have put him in a position that opposed the power-hungry heretic Gazia, Draegar secretly supported him before the Augmentation Wars began. Draegar deserted his position, joining Gazia’s forces, allowing himself to be augmented severely, turning Draegar into a terrifyingly powerful technological monster. The Elder Gods, seeing what Gazia had done to their creations, threw Athensphere into the Vortex, damning them for eternity. Draegar was unprepared for this sudden transition, and a sliver of the void entered into his mind, driving him to madness. After this point, Draegar goes on a killing rampage, believing that if he killed enough people, the voices in his head would stop.

In his insanity, Draegar finds his way to Elysia, which is still reeling from the loss of Xenon and Estia. A mercenary by the name of Grandt is dispatched to deal with Draegar, and is accompanied by the head mage Elaina. They engage in battle with Draegar, but he proves to powerful for Grandt and Elaina, defeating them with little effort. In doing so, Draegar gouges out one of Grandt's eyes, as well as cutting off his arm. The Summoner sees this, and steps in to fight Draegar, pushing him back and eventually forcing him to retreat with the help of a wounded Grandt.

After some time, Draegar returns to Gazia, and Gazia bears witness to the endless insanity that has taken over Draegar’s mind. Using a most unholy mixture of magic and science, Gazia managed to extract the insanity from Draegar’s mind. He then uses this pure insanity to create a powerful, faithful servant called Kranus. Unbeknownst to Gazia and Draegar, Kranus was a shard of the void itself, its sentience slowly growing. Gazia tasks Draegar with using a spell on Elaina in order to steal her Chronomancy abilities, planning to imbue Kranus the ability to control time like Elaina.

Draegar encounters Elaina, only to find that Nia, Grandt, and the Summoner are with her. They engage in battle, and Draegar is overwhelmed by the combined strength of the four heroes. Before they have a chance to kill him, Draegar casts a spell on Elaina, taking over her body, and opening a portal to Gazia. This spell allowed Gazia to imbue Kranus with Elaina’s abilities, giving Kranus the power to control time. The four heroes manage to defeat Draegar, nearly killing him. Blinded by fury, Elaina forgoes her magical abilities for a more primitive stance, kick Draegar as hard as she can, over and over. This continues until Draegar is dead, and Grandt steps in to stop Elaina from continuing to kick Draegar’s corpse.

Community content is available under CC-BY-SA unless otherwise noted.
Advertisement