watch 03:03
The Loop (Games)
Do you like this video?
Effect Duration Boost

For example, Nia, Maverick of Elysia's Extra Skill effect reduces the duration of the Turn Skip debuff by 3 turns. This makes her immune to any Turn Skip effects that last for less than 3 turns.

If a unit's buff were to have its effect duration reduced to 0 turns, the effect will not apply at all. This also means a buff with an effect duration of 0 turns cannot overwrite pre-existing buffs.

A Feast of Tears 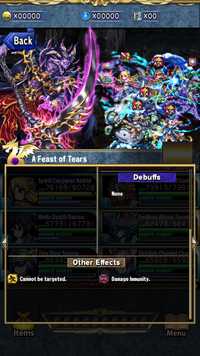 Certain quests have invisible enemies usually named A Feast of Tears. These are not meant to be targeted, as they cannot be targeted without scrolling through each enemy that appears in battle while checking enemy buffs. Additionally, they have Damage Immunity and Stealth effects active throughout the entire fight. When present in battle, they reduce the buff turn duration of the following effects:

A Feast of Tears generally reduces the duration of the above effects by 2 turns while present. Exceptions to this include the following:

Retrieved from "https://bravefrontierglobal.fandom.com/wiki/Effect_Duration_Boost?oldid=651423"
Community content is available under CC-BY-SA unless otherwise noted.