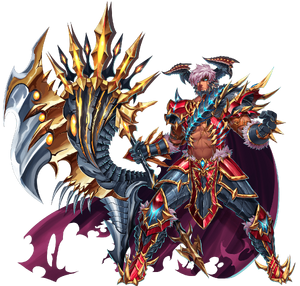 Korzan is a Non-Player Character (NPC) in the game. He is a Morokai renegade.

A notorious ravager from the world of Eneroth. Years of endless rampaging did not earn him any solace. Despite coming to be feared as one of Eneroth's mightiest warriors, Korzan's soul was left as empty as before. Determine to find a new purpose in life, he set off to seek a mysterious band of hunters rumored to consist of both Deva and Morokai.

He was convinced that the person capable of uniting the people of two warring nations might be able to provide the answers he sought. Upon arriving at their camp, he discovered that their camp was attacked by a trio of Emperor Devil Scorpions, one of the deadliest beasts to roam the Baldemar Badlands. Following his battle instincts, Korzan jumped into the fray and quickly slew one of the three scorpions.

Ready to take on his next prey, he was stunned to find the other two scorpions defeated. Upon their carcass stood a warrior. On her head were the horns of the Morokai and on her back spanned the unmistakable wings of the Deva. One look into her eyes was enough for Korzan to understand the difference in power between them. He thought to himself that perhaps this person could be the one to help him find his destiny.

As Korzan is chasing after a monster known as Leznik, he encounters the Summoner, who is currently exploring Korzan’s timeline. Korzan, who doesn’t recognize the Summoner, engages in combat with him, thinking he is an enemy. The Summoner defeats Korzan, who apologizes for attacking him, and takes him to see Haile. Together, the Summoner, Haile, and Korzan then defeat Leznik, and the Summoner is sent back to his own timeline.

Sometime later, Korzan engages in combat with his father, Azurai. Sensing that they are almost equal in power, Korzan goes all out trying to defeat Azurai, and exact revenge against his vile father. Azurai bests Korzan, and decides to crush Korzan’s spirit by revealing to him that he was holding back the entire time, and did not even have to exert himself to defeat Korzan. Azurai departs, leaving the now-wounded Korzan to make his way back to his tribe, the Rih’alnase. After Korzan recovers, he, Avani, and Haile set out to hunt the monster Kamakichi. In the time that they are gone, Azurai kidnaps Ezra, and takes her with him to perform the Ritual of the Ancients at the Synod of Forebearers. Korzan and Avani depart with the Summoner to fight Azurai, while Allanon, Nyami, and Haile depart to defeat the High Inquisitor, Aranvis. Korzan and the Summoner defeat Azurai, only to find that The Ritual of the Ancients has driven Ezra to insanity, causing her power to skyrocket, and for her to go berserk. With help from the Summoner and Avani, the trio are able to defeat Ezra, subduing her, and turning her back to her natural state. Eventually, Korzan, Avani, and the Summoner meet back up with Nyami, Haile, and Alannon. The Summoner then returns to his own timeline.

Retrieved from "https://bravefrontierglobal.fandom.com/wiki/Korzan_(character)?oldid=617068"
Community content is available under CC-BY-SA unless otherwise noted.