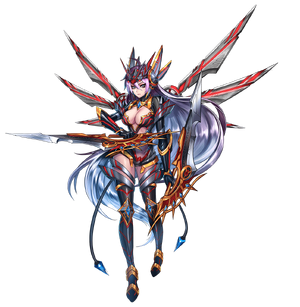 "This one will reverse the flow of energy of the conduit.
It will lose its ability to maintain the rift.
It is all this one can do.
We cannot allow Gazia to escape to Grand Gaia.
However, all who remain on this plane will be drawn back into the Void."
— Zenia in Void Mirage

Zenia is a Non-Player Character (NPC) in the game. She is one of Gazia's creations. In the Echo of Athensphere timeline, her counterpart is Avyn.

As an NPC character, Zenia first appears in Raid:X2, as well as in Frontier Rift: Void Mirage

Zenia was born with the gift to open rifts between worlds, and traverse the void to explore new timelines. This ability drew the gaze of Gazia, the Mad Tinkerer, who chose her as the target of one of his infamous augmentations. Zenia was augmented to become a powerful warrior, and Gazia used her to fight on his behalf in the Augmentation Wars. Normally fully under the control of Gazia, upon encountering Deimos and the Summoner, Zenia tore open a rift on top of Gazia and his armies of augmented beings. The act of doing so damaged Gazia and his army greatly, forcing Gazia and his forces to retreat. The Summoner, along with Zenia and the Demigods, pursued Gazia, managing to crack the shell of his servant, Kranus. Kranus, being a sentient shard of the void itself, began to expand in size, crushing Gazia to death and consuming Athensphere in its entirety. Just before the Summoner was going to be crushed, Zenia tore open a rift, and sent the Summoner back to his own timeline.

Community content is available under CC-BY-SA unless otherwise noted.
Advertisement